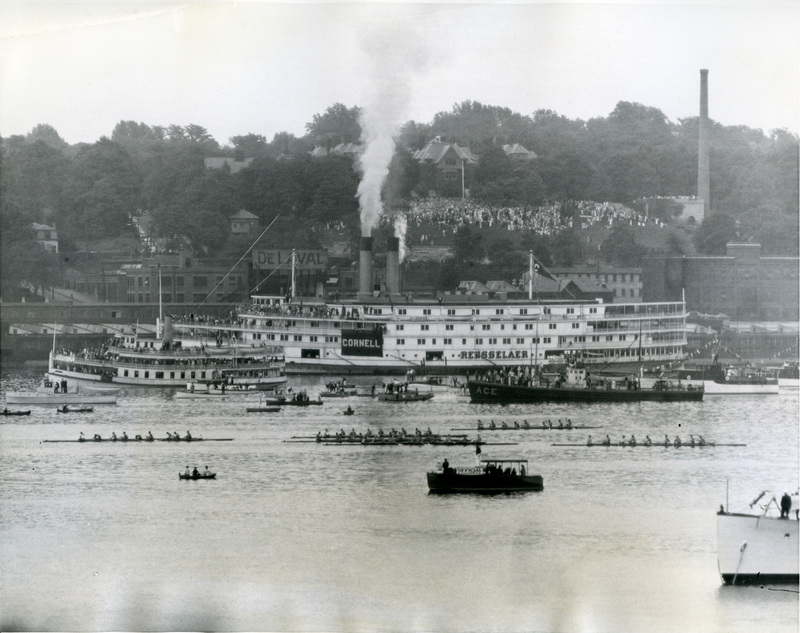 The Intercollegiate Rowing Association (IRA) was formed in 1891 by Columbia University, Cornell University, and the University of Pennsylvania.  They formed the Association in order to hold their own four mile race between their Varsity 8 crews as they had not been allowed to participate in the competition between Harvard and Yale Universities held at New London, CT.   In 1895, a section of the Hudson River between Poughkeepsie and Highland, NY (in front of what is now Marist College) was ultimately selected due to the relatively straight four mile stretch of river, the sloping banks that allowed spectators to easily view the race, the ability to run an observation train for spectators along the course to view the race, and the neutrality of the course, it was not home to any  university rowing teams.

The communities of Poughkeepsie and Highland were involved in the Regatta since its beginning.  They arranged for boathouses and quarters for crews and also welcomed thousands of race spectators to the area.  Famous spectators including Franklin and Eleanor Roosevelt, the Astors, the Vanderbilts, J. Pierpont Morgan, Teddy Roosevelt, and others.  The Poughkeepsie Regatta Association was formed to coordinate regatta preparations and facilities.  They with generous support from the City of Poughkeepsie, who donated land and funds, built boathouses at "Regatta Row."  When the Regatta returned to Poughkeepsie after World War II, citizens arranged massive celebrations with Mardi-Gras style parades, parties, and the crowning of a Poughkeepsie Regatta Queen.  While these celebrations were appreciated, they did not meet the crews' needs for additional boathouses and more.  And in 1949, the Hudson River hosted its last "Poughkeepsie Regatta."

The Regatta moved to Marietta, OH in 1950 and now rotates venues around the country.  The IRA, as the race is known today, is very different from the 1895 race.  There are more races, different divisions, and women's rowing is included.  The Poughkeepsie Regatta had a large impact on the region, but many have never heard of it or can recall what it meant to this area.  Our hope is that through this site, we can share the story of this national collegiate event and its place amongst the rich history of the Hudson River Valley.

or visit the Marist Archives and Special Collections in the James A. Cannavino Library to enjoy an on-the-ground exhibit.