Founded in 1870, Canisius College is one of 27 Jesuit colleges and universities in the nation. A private four-year university in Buffalo, New York, Canisius offers an array of distinguished programs in business, education, humanities, technology, sport administration, and health and human services, many with the flexibility of online classes.

During our Sesquicentennial Year (2019- 2020), the Andrew L. Bouwhuis, S.J. Library and its Archives and Special Collections commemorated the event with newly digitized legacy collections, and increased accessibility of newer social justice collections. These projects reflect values that emerge from our Catholic, Jesuit traditions, and our commitment to serve as the intellectual, academic, and social center of Canisius, and to transform students and others into lifelong learners who will serve and lead in a global society.

Our Archives and Special Collections identify, curate, and preserve our institutional memory along with focused special collections representing Canisius College history among the people and places of Western New York, and impact that extends well beyond New York State. 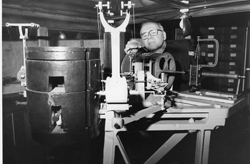 Canisius College has a distinguished legacy in the science of seismology. An 1881 graduate of the college, Rev. Frederick L. Odenbach (1859-1933) is known as, "the father of American Seismology." After joining the Society of Jesus (Jesuits) he continues his studies and training in Holland where he was introduced to the subject of seismology. "The Buffalo Times" (May 18, 1934) refers to correspondence that Father Odenbach sent to all of his colleagues Jesuit institutions in the United States after discovering the new, economical Weichert seismograph. It came to market in 1909, and Odenbach believed in the benefits "to be derived from the study of seismography on a national cooperative plan". The result ... 16 Jesuit colleges and universities installed seismographs, joining other Jesuit institutions in Europe, the Asian Pacific and South America to provide an accurate measure of seismic activity across the globe.

Canisius station, or observatory has been in continual operation since 1910, and always directed by teaching professors of the college Physics department, first by Jesuits, and later, lay scientists.

Dr. Austin McTigue, Professor of Physics directed the college seismographic program for thirty-years (1934-1974). Having been taught by the founder of the station, Father John Delaney, his devotion to the Jesuit Seimological Association (JSA), and specifically to the seismograph station, assured a continuum of its historical documentation, including original records, and preliminary data of epicenter (PDE) reporting cards. He also contributed to a role physics and geophysics played in Civil Defense programs in the U.S. and Canada during and after World War II, including into the Cold War.

Of other interest, McTigue's papers relate use of Canisius' and JSA seismographs in identification of St. Peter's Tomb in Rome, Italy.

Father James Ruddick, S.J. (1924-2007), continued to direct and curate the historic documents of the seismograph station from 1974 until his death. His legacy continues in a station tracking data through proprietary databases. In 2009, Father Ruddick was posthumously honored by the College with the addition of his name beside that of the stations's benefactor, Joseph Braun. The Braun-Ruddick Seismograph Station is located in Old Main---the original academic building on Canisius' campus.

Rev. Ludwig Bonvin (1850-1939) was a Swiss-born Jesuit composer, musician, scholar and teacher. His talents were an important contribution to Canisius College, the Roman Catholic Church worldwide, and musical performances internationally. He quite literally changed the musical landscape of Buffalo Buffalo, NY conducting philharmonic and secondary school orchestras, and directing numerous choral organizations. His extensive scholarship in the areas of Gregorian chant, hymnology, and mixed-choral performance made him an international authority in both liturgical and secular music. A finding aid is available at:

Selections of Bonvin's work performed by members of the Canisius College community can be heard below: